Green Bean Casserole. That famous (or is it infamous?) dish that everyone likes to bring to the holiday pot luck.

I need to make a confession: I have never made it! I’ve eaten it, though not in many years. It’s one of those dishes I avoid because I know it is likely to have MSG (monosodium glutamate) in it. (In reality, I cringe at the idea of pot lucks now b/c of my own food issues. But that’s another story.) I’m also quite contrary, at times. If everyone is bringing Green Bean Casserole, then I plan to bring something else!

So how might I make this recipe healthier? My first thoughts on this were to get rid of all the canned items in the recipe. But I realized that the popularity of Green Bean Casserole is based on two things:

Green Bean Casserole: Healthy or No?

There are many recipes on the web. I used this recipe for Green Bean Casserole for my analysis.

Is it even healthy? Its main ingredient is a green vegetable, so that can be considered healthy. Although, to make the quick version, you need cooked green beans which means either frozen or canned. Either works in a pinch, but fresh is always best, in my opinion.

This whole thing about cans is its own issue. Too often they are lined with BPA ( Bisphenol A), which has been linked to reproductive issues, cancer and more. The point of BPA is to put a layer between the canned food and the metal can. Alternatives are now in use, but even they are not 100% safe.

Another issue with Green Bean Casserole is the use of processed foods in the cream of mushroom soup and the French-fried onions. MSG is one reason, but they also tend to have too much salt and a lot of additives.

I love French-fried onions, but I rarely eat them. They are deep-fried, which isn’t all that healthy, and can be made worse when unhealthy oils are used. Sometimes, they have MSG added as a flavor enhancer.

Conclusion: Is it healthy? Not really. Does that make it a bad dish for the holiday pot luck? Maybe not, if it’s something you eat rarely. Just don’t be insulted if some people turn it down. MSG can trigger migraines and other issues in some people!

Can I Health-Ify Green Bean Casserole?

This is quite the challenge. How to make it healthier yet keep it simple? And don’t forget that the ingredients that make it not-so-healthy are also the ones that create its famous tastiness.

So my suggestions would be this:

Doing any one of these suggestions, or all 3, would help it be healthier.

I mentioned earlier that I can be quite contrary when it comes to bringing dishes to pot lucks. I’ve always been that way, even before I developed sensitivities to MSG and other ingredients. I usually will volunteer to bring a vegetable dish so I know for sure that there will be veggies that I can eat.

Here’s my simple suggestion for another dish for your holiday pot luck. I’ve made this for pot lucks and it is always well-received.

Do you have a recipe you would like Health-Ified? Visit Health-Ify Your Recipe to learn more. 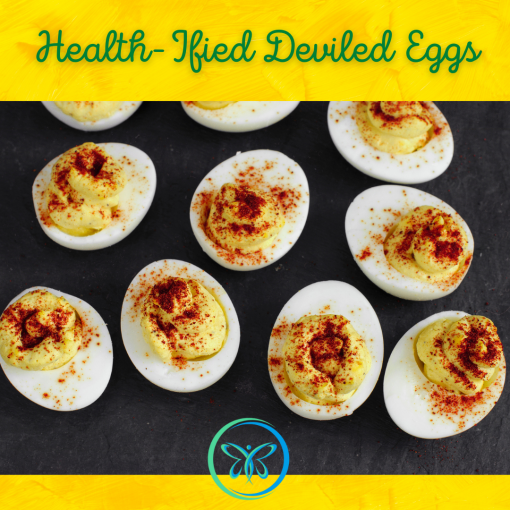 Deviled Eggs without the mayonnaise. For your next picnic or barbecue. Or just because they are delicious.