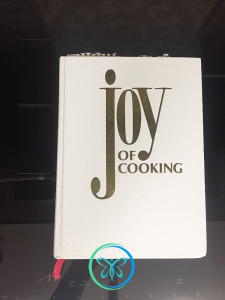 Growing up, my mother cooked everything from scratch and “The Joy of Cooking” was her constant and faithful kitchen companion. According to Wikipedia, it has been in print continuously since 1936.

(I get commissions for purchases made through the Amazon link on this page.)

As a child, I remember it fondly for its “Half Hour Chocolate Cake” recipe. I don’t recall why it was called that and, sadly, the recipe is not included in my edition with a copyright of 1975. My copy is not that old. I know for a fact that my Joy of Cooking was purchased after October 13th, 1987. But, back to the chocolate cake. It was the cake for birthdays at our house. I recall making it myself for the first time. It turned out dry to the point of being inedible! As I thought back over the process, I realized I had omitted the eggs! In my defense, I was at most 11 years old and possibly younger.

I love this cookbook. You can find a recipe for just about anything. It’s laid out well, with sections such as Salads, Fruits, Soups, Egg Dishes, Vegetables, Shellfish, Fish, Meat, and many more. Much of the time, you can find what you want by flipping through until you find the section you want, then the foods are in alphabetical order. 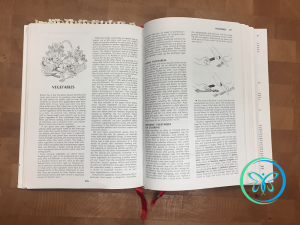 The Vegetables section is a good example. It opens with a picture and an entertaining discussion about vegetables. It also talks about preparing and storing vegetables along with information about various cooking methods. Then it presents specific vegetables, in alphbetical order, starting with artichokes and ending with watercress. All the other sections are similar in layout. The index, at well over 60 pages, is also useful.

My 30 plus year old copy of the Joy of Cooking shows signs of wear. It has been the star at many a Thanksgiving dinner. It has split in half and is close to splitting again. I still remember Mom’s Joy of Cooking. It was a light blue color and also showed signs of use. The 75th edition of “The Joy of Cooking” {affiliate link} was published in 2006. It is 236 pages longer than mine and has 4,500 recipes in it. Perhaps I’ll buy that version some day.

You might think a cookbook with 4,000 recipes would be all anyone would need, right? To that I say, what does need have to do with it? Several years ago, I felt that I had enough cookbooks. I even let a few of them go. Since then, I have become a cookbook collector and have an entire book case devoted to cookbooks. In the coming months, I’ll be featuring some of my other cookbooks.

What about you? Do you have a favorite cookbook? Tell us about it in the comments.