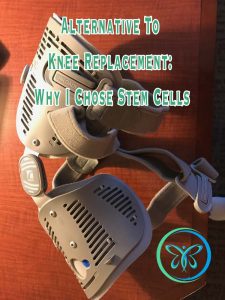 Is there a viable alternative to knee replacement surgery? Can you imagine a world where healing from knee arthritis does not involve joint replacement surgery. That is the future of orthopedics. And the good news is, it’s already here. It’s still new technology, but is it available. This is my personal story about my own issues with knee arthritis, and why I chose stem cell injections over invasive surgery.

I started having problems with my knees in 2014 and by late 2015 I hobbled into the orthopedic surgeon’s office, supported by a cane. I was in a lot of pain at that point. The doctor looked at the x-rays of my knees and said “You’re a candidate for double knee replacement!” At that point, I was 6 months out from having open heart surgery. I didn’t want to go to a hospital for stitches, much less major surgery. She said that we had time because she would want to wait until at least a year after that surgery.

She gave me steroid injections, which helped with the pain and inflammation. But I started looking for alternatives. What else is out there, other than joint replacement?

I started researching and ran across something called stem cell therapy. When I mentioned it to my primary care doctor, she laughed and rolled her eyes. And told me that there was nothing proven, so she would recommend against it. My research had shown that to be mostly true. Many doctors and clinics were offering it as a sideline to their primary practice. But their websites had little information. Nothing to tell me if it worked or if their patients got better. There was just no real data to show the efficacy of what they were doing.

I was skeptical for a while. Stem cell injections aren’t currently covered by insurance. So it would be my money that I would be spending. I needed more proof!

Then, in September of 2017, I met a lady who was talking about her experience with a company called Regenexx. She told me about multiple arthritis issues she had had corrected with them: knees, ankles, back, etc. She was very happy with her experience.

I began researching the company. I wasn’t jumping into this lightly. I read their website and followed what they did for nine months. They had specific protocols as well as the data to back up what they are doing. They began clinical trials in 2005 and claim the title of “Where Orthopedic Stem Cell Injections were Invented.” Their only work is in regenerative medicine: stem cell injections and PRP (platelet rich plasma) therapy.

Once I was brave enough to call them, I needed to have recent MRIs done for my knees. I had a phone consultation with the doctor and then set up the appointments in Dallas. The last week in September, my husband and I travelled to Dallas.

I had my first appointment on Monday morning. Their literature used a farming analogy, so this first day was like tilling the soil. They injected my knees with a solution to get them ready for the stem cells.

Wednesday morning, they extracted bone marrow from the iliac crest, part of the pelvic bone. They are very specific about the places from which they extract the bone marrow. Then they process that bone marrow to isolate the viable stem cells.

Wednesday afternoon, those stem cells are injected into my knees. They used the MRI advanced imaging as well as fluoroscopy (a type of x-ray) in order to see exactly where they need to inject the cells. In our farming analogy, the seeds have now been planted.

I walked out of the office that day wearing the braces shown at the top of this blog post. The braces help to stabilize the joints as well as taking some of the weight off of the joints.

They say that it usually is 30 days before people start to see improvements. As of the day this is posted, I’m on day 27 or so. I’ve already seen my first little hint of improvements!

Just like with the joint replacement surgery, there is a time lag before full recovery. I still have physical therapy exercises to do, but I don’t have the pain that accompanies the surgery.

Like I said at the beginning, this is the future of orthopedics. And it isn’t just about knees. They have procedures to repair a torn ACL (anterior crucial ligament) or a rotator cuff, without surgery. They can help with many orthopedic issues whether in the back, the neck, the knee, etc. In fact, they believe that eventually their procedures will replace 90% of orthopedic surgeries! The procedures are not covered by major medical insurance companies, yet. Regenexx is working to change that and already has smaller insurance companies covering their procedures.

I’ll have more updates as time goes by.

I’m curious to know if you’ve had experience with either stem cell injectiosnor joint replacement. Would love it if you told about your experience in the comments.

This is the story of Barbara’s knees. Knees that have served me very well for many years, but began to express concern […] 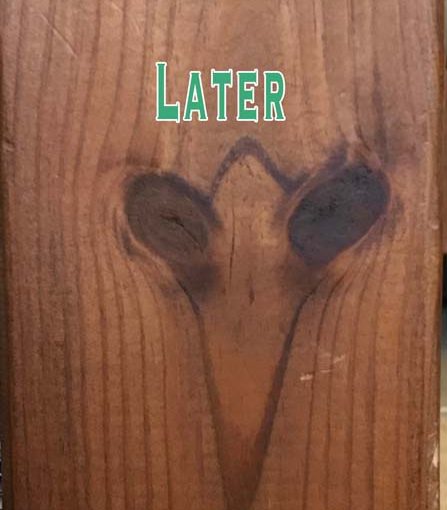 It’s time for another update. Tomorrow, November 7th, marks 6 weeks since I had my stem cells injected into my knees. I […]

Is your knee pain really arthritis? It may not actually be. Not to say you don’t have arthritis. I’m just speculating really: […]