It’s time for another update. Tomorrow, November 7th, marks 6 weeks since I had my stem cells injected into my knees. I can’t say that I can run and jump and play like normal kids just yet. But I can definitely tell that things are changing.

If you’re at all personally familiar with knee arthritis then you’re no doubt familiar with that stiffness you feel after sitting for extended periods of time. It’s especially awkward when out in public, like at a movie. You either wait until everyone leaves the theater, or slow everyone down because you can’t bend so well. I’m happy to report that there is no more stiffness. Pain levels are reduced as well. I also am feeling more flexibility and willingness to move.

I may not have written about was the other issue I had treated while I was there. I’ve had some issues with hip pain and when I mentioned them, the doctor suggested the problem could be in the back. Maybe that sounds weird to you, but I’ve read enough to know that all those parts are inter-connected. Perhaps you’re familiar with having a problem in one area and then you walk differently because of it and wind up with an injury somewhere else? It’s the same rationale. He did find an issue between L4 & L5 in my lumbar spine and suggested that platelets could help with that. So, I had platelets injected in my back while I was there.

Those exercises were to start a week after the injections. That first day, I went through the entire two sets of exercises. It took me nearly 2 1/2 hours! Some exercises are to be done daily, others 6-7 times a week, and still others only 4-5 times a week. For the first 2 weeks I worked out a schedule where I did most of the exercises on schedule. But the time! Who has that much time?

After two weeks, I realized that I needed to modify my plan to make it sustainable. Since then, I’ve been doing the whole set every day, except I don’t do quite as many reps as the papers suggest. It takes me about an hour and fifteen minutes. And, so far, I have only missed two days! Which translates to doing my exercises 33 out of 35 days! That’s a pretty good track record, no?

I will likely keep some part of the exercises up after the six weeks prescribed. I have found that I have gained a lot of strength doing them. Some of them were nearly impossible at the start, and are pretty easy now.

I’ll have another update in a few weeks!

BTW: Are you wondering about the image I chose for this blog post? It’s a picture of one of the legs of my coffee table. I’ve been looking at that table leg every day while exercising. What do you see in this image? 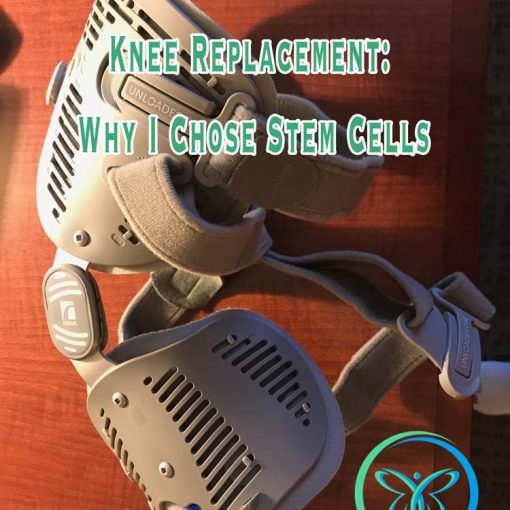 Is there a viable alternative to knee replacement surgery? Can you imagine a world where healing from knee arthritis does not involve […]

Is your knee pain really arthritis? It may not actually be. Not to say you don’t have arthritis. I’m just speculating really: […]

This is the story of Barbara’s knees. Knees that have served me very well for many years, but began to express concern […]