This week’s quote was suggested by a friend of mine:

“Do the work, become the artist. Instead of planning, simply become. Acting as if is how we acquire identity.”

Sometimes I hear Ready! Fire! Aim! in relation to suggesting that someone should have planned better.

But I believe Ready! Fire! Aim! has its merits, too.

Oftentimes, we spend a lot of time planning but what we really need to do is to create a plan and then try it out.

Then, we evaluate the situation and re-aim. As soon as we start taking action, we begin to see more.

Think about it for a bit. Isn’t that exactly what Wilbur & Orville Wright did? They set out with the intention of having their plane take flight. They didn’t just build a plane and fly it, though. They researched what others had done before them. They tested their ideas first using kites. They designed and built their first glider in 1900. And finally, in December of 1903, Wilbur & Orville took their first flight.

So there was a lot of Ready! Fire! Aim! going on with the Wright brothers.

The same is true for Thomas Edison and the light bulb. He spent a lot of time researching his design and determining what material would make the best filament. Testing some 6,000 different filaments.

He too was using the Ready! Fire! Aim! strategy.

Here’s what Edison had to say about his invention:

“The electric light has caused me the greatest amount of study and has required the most elaborate experiments. I was never myself discouraged, or inclined to be hopeless of success. I cannot say the same for all my associates.”

“Genius is one percent inspiration and ninety-nine percent perspiration.”

There are no overnight successes. The Wright brothers and Edison succeeded because of all their failures. Because of their willingness to do the work. To research what had been done. And Try and try again.

In fact, I am taking my own advice. I did not see this coming, but I have decided to change course. To return to a project that I put on the shelf a few years back.

I chose this week’s quote before I made that final decision, but I think that the universe may have played a hand in it all.

I’m reviving a project that I first started working on in 2013. And put it aside, for reasons that don’t really matter now.

I’ve been cooking since I was 10 years old. When I began studying health coaching, I began to cook even more. And I learned to love to cook and eat fresh vegetables. As well as learning just how important all those veggies are to our health.

In 2013, I started planning a cookbook that I named Veggies 101. And though I put the project on the shelf, it was always with me.

Veggies 101 will be much more than a cookbook, though. When I’m in the kitchen, I’m often talking, in my head,t o an audience describing what I’m doing, talking about ingredients, and why they matter. So, I plan to create videos. There’s a lot more to it, and I’ll be talking more about it in the coming weeks.

I am super-excited to get started on Veggies 101.

Tell me in the comments: Do you have a favorite vegetable? 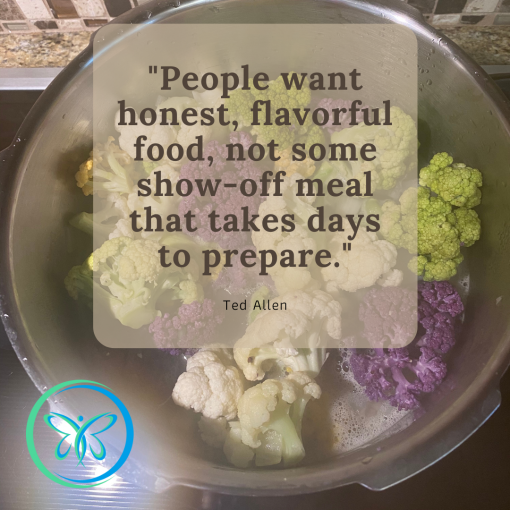 What keeps you from cooking more meals at home? I know that for many people, they don’t know what to cook and […] 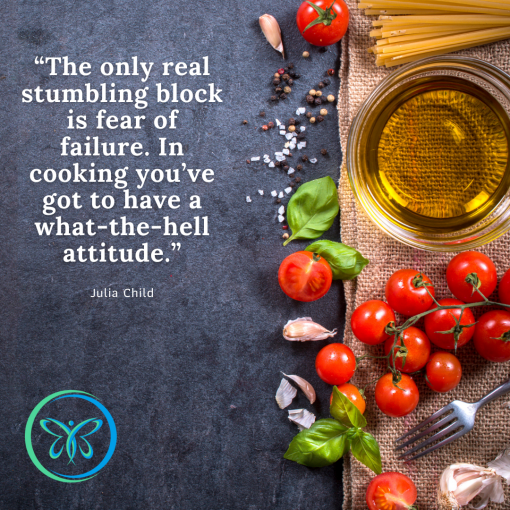 “The only real stumbling block is fear of failure. In cooking you’ve got to have a what-the-hell attitude.”— Julia Child What keeps […]